Having not been to a bike show for a year or two, we decided it was time to pay a return visit to the ExCeL centre in London's Docklands for the MCN London Motorcycle show.  A smaller event than the NEC and much easier for us to get to yet big enough to have all of the major manufacturers present and a wide enough range of trade and other stands.

We meet up at our regular Ace Cafe rendezvous for breakfast, on Friday morning.  A damp but not raining start and surprise, Chris was late albeit only 10 minutes!  As usual, great food though fairly rank coffee, and good chat before heading off around the North Circular Road to the ExCeL. Nick had managed to leave his waterpoof over-trousers at home and so was keeping a close eye on the weather!  An uneventful 45 minutes later, we arrived in Docklands; the rain for the most part having stayed away. As always, undercover parking in one of ExCeL's vast halls was provided and a fair few bikes had made it before us, despite arriving at 10:00 just as the show officially opened.

It is a testament to the size of ExCeL that there were 4 other exhibitions/shows on as well as the bike show!  We both had lists of items to buy so we started with a quick run round each manufacturer's stand, as always avoiding the Japanese bikes! That said, after Ducati (Nick was very taken with both the Multistrada, a beautiful bike, and the Diavel Strada, a great bike and like Triumph's Rocket III Roadster, a clever way to make a cruiser design more mainstream and comfortable for longer distances) Chris headed straight for Kawasaki!  What is wrong with the man?  Well actually he had arranged to meet up with Jan from DragonMotoTours. A full time tour operator running a number of trips around the UK and Europe, it was great to talk to someone who tours for a living!  One day... may be?

​From there to Triumph, a quick hello from Geoff from Jack Lilley who was helping man the stand and time for Nick to sit on a number of bikes!  Then onto BMW with some lovely bikes all round, high end prices are getting very high though!   Buying ex demo/nearly new has certainly enabled both of us to buy nice bikes at a much lower price than new. Chris found the slickly named BMW K1600 GT Exclusive which is particularly spicy at a shade over £22k, complete with pillion arm rests!  See pictures though as there's one showing something which doesn't happen very often, Chris on a BMW!

Once all bike stands completed, the quest for the specific items began!  Chris did particularly well at Infinity Motorcycles finding a nice pair of Daytona boots and Rukka Lobster (Mr Spock style!) gloves for a total of £400, a considerable saving on rrp.  Nick was trying to find a suitable iPhone mount for his new GS; Touratech seemed like a good place to start and sure enough, their stand was equipped with a number of GSs kitted out with Touratech gear. A flick through the ridiculous Touratech catalogue (think size/weight of two house bricks - surely in this digital age, that is a little unnecessary?) failed to reveal anything.  One of the Touratech staff insisted that Nick needed a new bar to mount anything above the clocks (Nick was unconvinced and was persuaded when one of the GSs on the stand appeared to show this requirement) and so agreed to order a bar and an iPhone waterproof case. Whilst waiting to order at the (only) sales desk on the stand, Chris spotted a smaller stand nearby and found the same waterproof case for £15 less! That'll just be the bar then! And having paid for that, Charley Boorman put in an appearance on the stand!  A quick chat and opportunity for Charley to try and sell us a couple of spaces on his South Africa tours (flight to SA and someone else's bike is certainly appealing, the time/££££ required less so) we moved on. Nick found some nice Kriega luggage and Chris some base layers before we decided it was time for lunch.

Walking through the concours/route through ExCeL highlighted again how big it is. People everywhere. A couple of paninis and coffees in the main concourse was just what was needed and it was time to head off. Nick popped back into the show to get a pair of waterproof trousers (the rain no longer being at bay...) and it was back to the bikes. Chris headed into the office for some meetings and Nick onto the M11 and M25 home. The £15 for the waterproof trousers proving to be the best purchase of the morning, the rain falling in monsoon quantities. And the worst purchase of the afternoon turned out to be the Touratech 'bar' that was supposedly essential - guess what? As Nick thought, the existing bar is more than adequate for the iPhone case. When the Touratech one arrives, it will be heading back, a very poor experience!

As previously, the London show proved to be perfect for us; close, not too big and not 2 hours to get home! To be honest, whilst the NEC is undoubtedly more comprehensive, in our experience, there is probably too much - London has all the manufacturers (although oddly, not Suzuki this year) and you can only walk round so many trade/sales stands.  All in all, a good morning out, and not a whole day written off in the process.

Held in ExCel on a fantastic and sunny February’s day…

Chris and Nick didn’t make it to the NEC in November last year, a combination of work commitments and to be honest, a feeling that it’s a long way (100+ miles) at a cold time of the year to see the same old same old. That might sound like a sad thing to say, but once you’ve done the main manufacturers’ stands (and to be honest, we’re only really interested in a handful of those), looked at a few of the niche products available and purchased a year’s supply of earplugs/Scottoil/Muc Off, there’s not much else for us, other than the long drag home.

So, this year, and for the first time since it’s been at the ExCeL centre in London’s Docklands, we decided to go to the London Bike Show instead. For both of us, a ride of no more than 30 miles and along well known roads. The event takes place in February and is attended by all the major manufacturers as well as an admittedly smaller than the NEC array of niche product and independent stands.

Arrival at the ExCeL centre travelling from the east involves riding past London City Airport (the only London airport that’s actually in London) with Canary Wharf and the O2 in the background – it’s a stunning city scape, with jets arriving and departing, and well worth the journey for the scenery alone! Ample indoor parking inside one of the ExCeL centre’s huge exhibition halls and we’re on our way into the show.

The main arena is much smaller than the equivalent at the NEC…but all the essentials are there and for us in particular, the new Triumph Tiger Explorer on the Triumph stand. In fact Triumph had an impressive stand with all of the current line up present and similar to the NEC in that everyone is welcome to climb all over (well, sit on!) all of the bikes on show. We spent a good couple of hours looking at the main manufactures’ stands that interested us, BMW and Ducati mainly in addition to Triumph…perhaps it’s us, most of the Japanese fair seems very bland in comparison to an Explorer, K1300S and Diavel. Europe seems very much to be where it’s at. As ever, we had a number of bits and pieces to get so a mooch around the trade stands was then next…and being much smaller than the NEC, this doesn’t take as long.

And then into the Motorcycle Live show. Included in our ticket price, booked some months ago on-line, was entry to the stunt show, an impressive set with a great view from the grandstand – the theme was a number of ex racers racing around a tight track after a display of jumps and general stunt work.  Undoubtedly very special, for us though, once you’ve seen half a dozen special jumps, and indeed they were very special, you’ve seen them all and dare I say it, after a while just a little boring…

After 3 hours or so, we had covered all we came to see and so headed off home; the great thing being though, having arrived late morning, departure was mid afternoon and ahead of the rush hour meaning both of us arrived home in around 45 minutes, and certainly much quicker than the equivalent trip from Birmingham. All in all, for London or Home Counties residents, the ExCeL show gives you everything you need at a lower cost, a shorter journey time and a much easier hall to negotiate. On top of that, on the Friday we were there at least, it was also relatively quiet too… 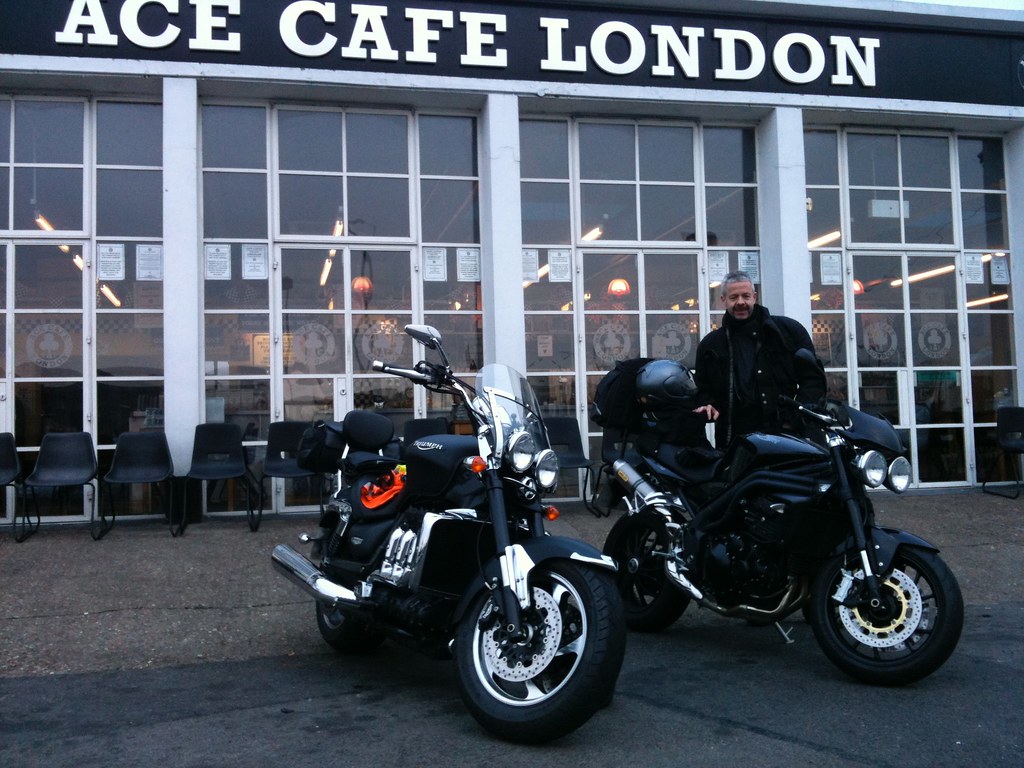 We have been to the Motorcycle Show at the NEC for 5 years on the trot. Then the trauma of the financial crisis 2008 meant we gave it a miss in 2009! However, with lots of new exciting bikes including the new Triumph Tiger 800 we felt we must go. We biked off after a quick brekkie at the Ace and into the freezing cold...

The pre show news on 2011 bikes was very exciting. New Triumphs particularly the new Tiger 800s, the new Speed Triple, new BMWs especially the new 6 cylinder 1600 Tourers and many introductions from other manufacturers.

We biked up on Monday 29th November. Over the weekend we were concerned we may not get there as it had snowed heavily in the North and Scotland. However, it had not got much further south than York.

We met at the Ace café for breakfast, an excellent way to start the day. Then it was a blast up the M40 to the NEC. Chris noticed Nick falling behind as we neared Oxford, the wind blast and cold were starting to get to him while Chris was really enjoying the protection of his screen, albeit the summer screen! Also Chris was well dressed with 2 pairs of socks, EDZ wind shielded trousers and top, EDZ yeti fleece and EDZ Marino wool leggings and top! In addition to his Triumph leathers, Chris also had my Triumph waterproofs on!!!

Nick pulled over into the Northampton Services and pulled up next to 2 Street Triples. They had recently left Oxford but were already cold! We defrosted inside drinking hot chocolate whilst the Triple riders had a quick smoke and left.

The second leg of the journey was quicker and warmer and we arrived just ahead of the Street Triples, they had stopped for another fag break!

On arriving we headed straight to the Triumph stand to see the new Tiger 800s. Very impressive. We also liked the new Scrambler.

Our bargains included Schuberth C3 helmets for £350, down from £475! We didn't go for the Bluetooth fittings as they were £285 each! Hopefully they will come down in price soon.

All in all a fun day out. 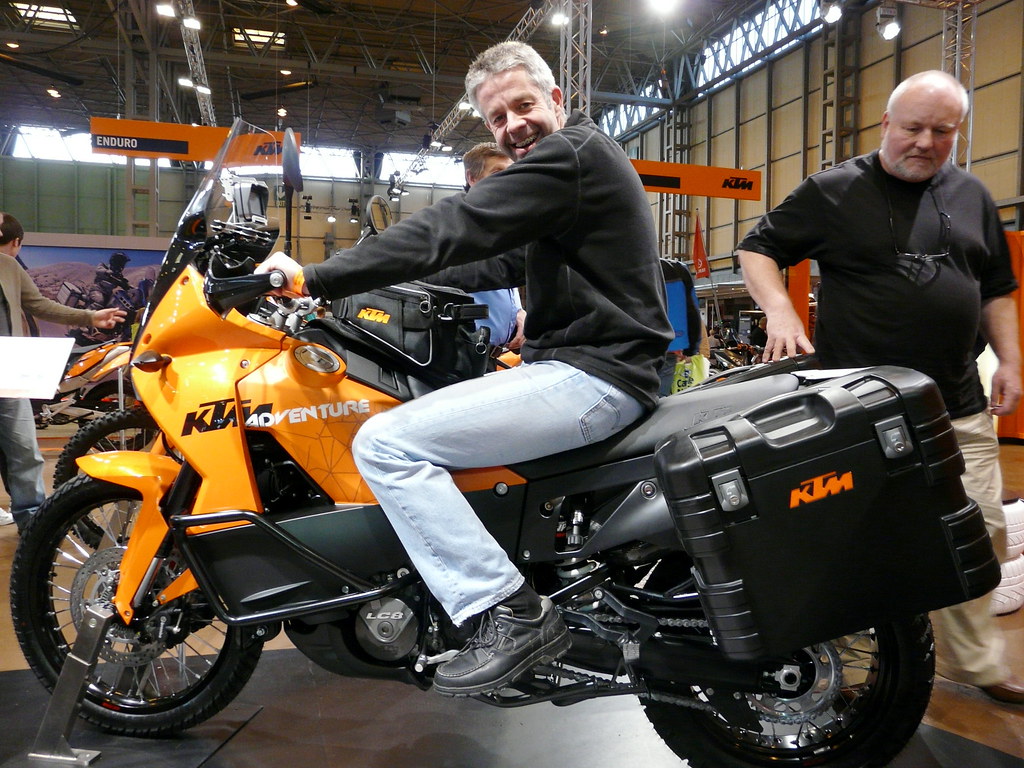 You didn’t often see pics of BMWs on our site!  That’s because I was massively biased towards Triumph.  However, if I had to own another manufacturer’s bike it would probably be a Beamer!  Especially now there is a K1600! Anyway here are some pics from our visit to the MCN Motorcycle Show back in 2008.